These scientists took a creative approach to building negative-pressure fluid actuators, folding origami and zigzag designs to achieve pressures and power densities on the scale of real muscles. Depending on the folds, they could control how the actuators moved as well.
Research out of The University of North Carolina at Chapel Hill produces fluid-driven origami-inspired artificial muscles (FOAMs) that are actuated with negative pressure. Featuring custom folded designs, they offer an alternative to traditional artificial muscles that tend to only achieve a single degree of freedom and strokes and pressures lower than those achieved by real muscles. Depending on the folded design, these FOAMs can offer multiple degrees of freedom, and contract 90% of their initial lengths with stresses up to 600 kPa. Peak power densities are also over 2 kW/kg, which meets or exceeds that of real muscles
Artificial muscles are a long-sought class of actuators for applications in industrial robots, wearable devices, and medical instruments, according to the report. Typical transduction methods include thermal energy, electric fields, and pressurized fluids. The team chose a polymer filled with pressurized fluid because it offered the highest young’s modulus or contraction distance per newton force applied. 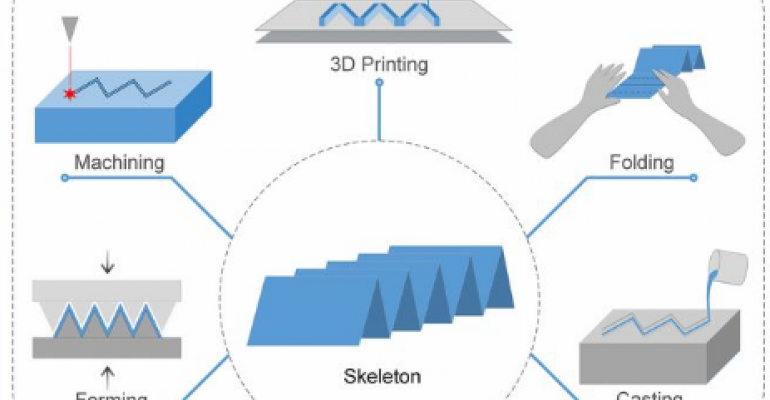 The actuators leverage a spring, origami fold, or solid skeleton structure with hinged or elastic voids to achieve motion under negative pressure. Thin sheets of thermoplastic polyurethane (TPU), vinyl (PVC), polyester, and a TPU-coated nylon fabric make p the actuator skin to cover the skeleton. The skeleton is constructed using methods including 3D printing, machining, casting, forming, and manual folding. Methods like heat-pressing, gluing, welding, zippering, and sewing were used to seal the skin.
Using a symmetrical zigzag geometry, the team could achieve a 90% linear contraction. To see this actuator in a miniaturized form, and in a larger form lifting a 20-kg load, view this movie included in the report. The image below shows examples of actuation using zigzag configurations under negative pressures. To learn more about programmable motions with advanced folds, and the performance capabilities of spring actuated actuators compared to folded designs and skeletons with hinges, see videos, images, and details listed in the report.
The research was published by the US Proceedings of the National Academy of Sciences (PNAS), and supported by the Defense Advanced Research Projects Agency (DARPA), National Science Foundation, and the Wyss Institute for Biologically Inspired Engineering.
分享到：
【Printing】  【Close】
Previous：Layering graphene creates sensors for energy-efficient IoT  Next：Emerson Booth at AHR Expo to Showcase Tools and Technologies in Comfort, Cold Chain